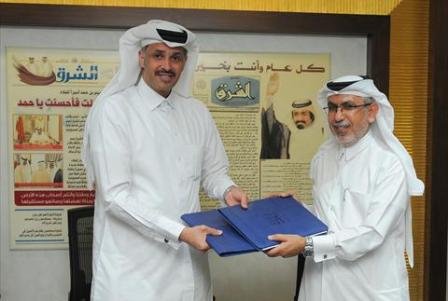 Al-Sharq Al-Youm Newspaper has signed a partnership agreement with the Diplomatic Center for Strategic Studies. Al-Sharq Newspaper and Al-Sharq Al-Awsat portal hereby publish summaries of research, studies and scientific analyzes issued by the Center on the most important events and hot topics on the regional and global levels.

The memorandum was signed by Mr. Jaber Al-Haremi, Editor-in-Chief of Al-Sharq newspaper and Dr. Rashid bin Safar Al-Hajri, Head of the Diplomatic Center for Strategic Studies. The signing of the Memorandum of Understanding comes within the framework of the East and Diplomatic Center’s keenness to spread public awareness and disseminate political culture in Qatar and the Arab nationalities. Developments and hot issues in the region and the world and the Arab Islamic mindset.

Based on the pivotal role of the Diplomatic Center in providing political leaders, researchers, political elites, intellectuals and those interested in political affairs with the most up-to-date studies and analysis of important political issues in the region and the world, the Center will provide these studies and research in detail on PDF files, Its website is “www.dcss.qa”. The Center also publishes two morning and evening publications, which are textual translations of all research, studies and press releases issued by international media centers and institutions, especially in America and Turkey Iran and Israel, aimed at these translations to reverse the mentality that deals with the West and the outside world with the Arab and Islamic countries, in addition to the follow-up to the center, dissemination and translation of all the topics covered by the international press about the preparations of Qatar to organize the World Cup World Cup football in 2022.

Following the signing of the agreement, Mr. Jaber Al-Haremi said that Al-Sharq newspaper is proud of this partnership and promises to do everything that can achieve the objectives of the Center. He added that the Middle East is always working to support national institutions with a missionary role that goes hand in hand with the progress achieved by Qatar at all levels. Is one of the institutions that represent Qatar and therefore will find all our support and we look forward to consolidating the relationship and expanding the base of joint work in order to achieve the goals and vision of the center, stressing that Qatari diplomacy by its reputation and serious endeavors and qualitative successes have provided a stable ground for Focused to trace its impact on the current and future career.

Dr. Rashid bin Safar Al-Hajri said that the selection of Al-Sharq newspaper as a partner in this huge work was not coincidental but was chosen for its reputation, capabilities and enormous potential that made it one of the largest newspapers in the Gulf region and the Middle East. Al Hajri thanked HE Sheikh Thani Bin Abdullah, Chairman of Dar Al Sharq, Mr. Abdul Latif Al Mahmoud, CEO of Dar Al Sharq and Mr. Jaber Al Haremi, Editor-in-Chief and Executive Vice President, for their efforts to overcome obstacles and obstacles to the work of the Center. In the near future to reflect the role of the Center at home and abroad, stressing the confidence of the Center in the newspaper Al-Sharq because of its enormous potential made us keen to establish a strong partnership with them.

Al Harmi and Al Hajri During Signing the Agreement in the Presence of Colleague, Abdul Aziz Ma’rifi

Dr. Al Hajri stated that the Center for Diplomatic and Strategic Studies is the first of its kind in the world due to its specialization in political dispute resolution and the management of negotiations and international mediation in all of the issues in the region and the world as a whole. He also clarified that the Center was established to bridge a gap since the Middle East lacks such a type of centers. Al Hajri announced that the Center will be officially launched on June 1st, 2015, adding that it is a great honor to launch that Center from Qatar as the Center includes a group of Arab and Muslim experts as well as academicians and former ministers in all its departments. The Center will include, as for its management, a prominent political figure – whose name will be declared later – who has an international eminent status as he has been the former Prime Minister of one of the Islamic countries. Al Hajri also added that the Center is part of the Qatari diplomacy which has achieved remarkable successes through the great roles it played on the regional and international levels. The Center is a real opportunity for all the Qataris to cope up with these successes. Taking into account the success of the Qatari diplomacy, Qatar has become a source of confidence for all countries in the world, particularly in regard to dispute resolution and international mediation.

Al Harmi, Al Hajri and Ma’rifi after Signing the Agreement

Al Hajri declared that the Center has a specialized academy in dispute resolution and negotiations. This academy has been approved in Britain and has been opened in London. He also clarified that a branch of the academy will be opened here in Qatar in early June of the current year. This academy will provide opportunities for the Master’s and Doctorate degrees which will be available for those candidates interested in studying this field. Al Hajri stressed that Al Sharq newspaper as well as Al Sharq E-portal will be the main platform for the dissemination of the news of the Center for Diplomatic Studies. The news of the Center and any latest developments will exclusively be published on that portal.

It is worth mentioning that the Diplomatic Center for Strategic Studies is a strategic research center that was founded in Doha, November 2014. The Center is an independent institution which monitors and analyzes Gulf affairs and associated regional and international interactions. The Center is also specialized in the management and settlement of disputes, to say nothing of being a link between researchers, thinkers, and experts as well as administrators and decision makers. The Center presents research and studies as well as providing specialized estimations and consultancy. The Center is also a guide for researchers and the concerned with accurate databases and integrated files.